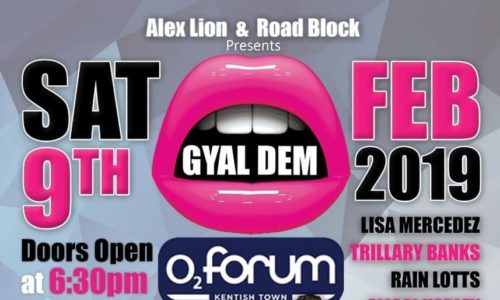 Presented by Alex Lion & Road Block. This will be an all girls take over line-up with a great diversity of female artists.

Lisa Mercedez is a British-Jamaican dancehall artist recognised for her combination on tracks with Stylo G and Ms Banks. Lisa’s known also for Underground Dancehall Music which sometime freestyle and explicit.

Alicai Harley aka ‘Hot Shot’ originated from Kingston, Jamaica now residing in the UK. Genre is dancehall vibe track such as ‘Naah Done’ and ‘Gold’.

Another Londoner NoLay is a female Mc, rapper actress in (Top Boy, Film) Genres: Hip hop music, Grime. NoLay has a large collection of tracks and which she has collaborated.

All Hosted By Shabba The Comedian

Age; this is strictly an Over 18’s event