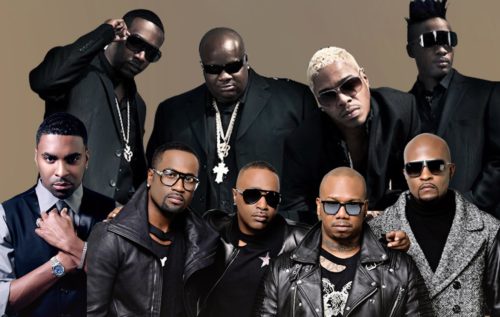 With super selling out its London gig in under than 2 hours, the TCO Group has added a 2nd date to the tour’s London show. Celebrating an exceptional 20 years in the music business, US R&B superstars 112, Dru Hill Sisqo Ginuwine Live In Concert will hit the London stage twice on its newly added date – Thursday 5th October 2017 followed by its sold out show on Friday 6th October at the London Indigo at the O2; and then also on the following Sunday 8th October at the O2 Academy Birmingham performing for the first time ever to perform an outstanding two decades worth of heavy hitting chart topping hits and truly unforgettable beautiful R&B classics.

The R&B group, 112, the first and most successful boy band to sign to Sean ‘P Diddy’ Combs’ record label – Bad Boy Entertainment, have certainly held their position as one of the top old skool R&B and Hip Hop boy bands from out of the 90’s. Songs such as chart topping  ‘Only You’, ‘Cupid’, ‘Anywhere’ and club banger ‘Peaches and Cream’ plus featuring on the most notably Grammy Award winning song ‘I’ll Be Missing You’ with Puff Daddy and Faith Evans saw the soulful quarter reach international stardom in the late 90’s right through to the mid-noughties. With 5 successful albums under their belt including individual solo albums whilst on hiatus from 2007, the group surprised their fans by reuniting on stage with all four members for a string of concert dates titled ‘For The Fans Tour’ in 2015 and the ‘Bad Boy Family Reunion Tour’ in 2016.

Sisqo, Nokio, Jazz and Tao are the four members of the multi-platinum selling group Dru Hill. Known for their soul, hip hop and gospel enthused sound, Dru Hill took the charts by storm with five top 10 singles – ‘Tell Me’, ‘In My bed’, ‘Never Make A Promise’ and ‘5 Steps’ off their debut self titled album ‘Dru Hill’. The group’s follow up album ‘Enter the Dru’ featured their most successful international song to date with ‘How Deep Is Your Love’, which also appeared on the soundtrack to the 1998 box office hit film, Rush Hour. With lead vocalist, Sisqo, venturing off for a more commercial R&B solo career, the triple threat artist released his number one hit records ‘Incomplete’ and the quintuple platinum selling single ‘Thong Song’. The group continued to go from strength to strength with a total of four chart topping albums, nine top 10 singles including two hit features on ‘Big Bad Mamma’ with Foxy Brown and the ‘Wild Wild West’ with Will Smith, a hit reality show to releasing their first single ‘Change’ in 2016, six years since their last studio album.

Award winning singer and 90’s heartthrob, Ginuwine, is one of the most pre-eminent male R&B artists of all time. Emerging on the scene with his multi-platinum selling album ‘Ginuwine … The Bachelor’ produced by the prolific hitmaker Timbaland; the talented singer/songwriter hit the charts with his debut number one selling single ‘Pony’, also charting an incredible top 10 position in over five international countries worldwide. Going on to release further hits such as ‘Differences’, ‘So Anxious’, ‘Same Ol’ G’ and ‘In Those Jeans’ plus featuring on P.Diddy’s Billboard number two chart selling single ‘I Need A Girl (Part Two)’; Ginuwine also joined forces with R&B crooners Tyrese and Tank in 2007 to form the supergroup, TGT, gaining the trio a Grammy nomination for their debut album ‘Three Kings’.

Now working on his eighth studio album, titled ‘Same Ol’G… the Bachelor’, the solo singer will return to the UK for the first time in two years to blaze the stage with a catalogue of unforgettable hits.

It’s time to celebrate 20 years of legendary hits from the three kings of R&B and Hip Hop Soul this October!

Tickets for this EXCLUSIVE show start from £32.50 and will be available to purchase at www.ticketmaster.co.uk and www.axs.com from Friday 31st March 2017.