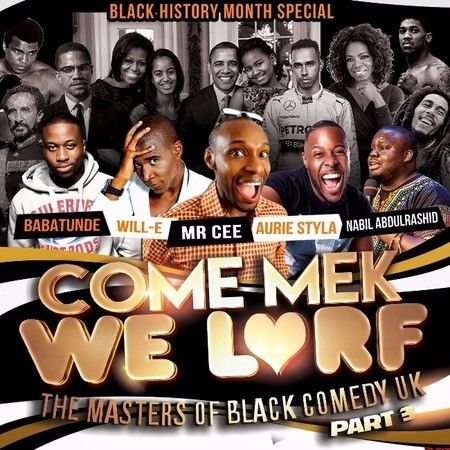 ‘Come Mek We Larf’ again at the Millfield Theatre of a list in the series promises a night of Funtastic Entertainment, featuring the Best in African Caribbean Comedians.

Amazingly after two years of sold out events, we continue, by bringing the stage alive with the perfect Spirit and Vibrancy to celebrate Black History Month special with a big belly full of fun filled Laughter.

The Masters of Black Comedy UK part 3 presents with 4 of the UK’s Champion Comedians that have love and will to Entertain you.

Plus hosting the evening will be the ‘Cool, Charming & Conscious’ Mr Cee.

Be on guard to witness comedy in its supreme form, with an myriad of cultural hilarity and dazzling of humour.

There will be no better way to celebrate 2017 Black History Month, with none other than our first-class Masters Of Black Comedy in the UK.